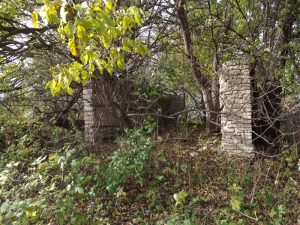 “Outside of town on the hill above the factory. Bring the minivan. We’ll need it to get up there.”

This was in the 1990’s. Always anxious to see the grand-kids, my mother’s ruse worked for we drove over 600 miles to see ‘the castle’ and Grandma. The boys were excited. A real castle! In America?

“I had the opportunity to read the diary kept by the mistress of the castle,” Mom said. “And it was fascinating!  She and her first husband lived in England but they spent their winters in Italy surrounded by other aristocrats who she wrote about. After his death, she met and married a penniless minister and with the lure of religious freedom, they came to America. Castle construction began in 1854.”

But still, I grew up in Dappersville. How did I miss the castle? Once at the top of the hill, it was obvious that there once was a castle there. Like many fortresses in England, it crumbled, the stones used to build other structures like the barn nearby. The castle burned to the ground in 1903; the barn sometime later.

Yet, the local newspaper and history books tell of its 27 rooms with heavily carved walnut woodwork and a massive library with leather-bound books, documenting its existence. But only a single entry exists in the diary about Dappersville, and no mention of her elaborate home. The terse writing contrasts the detailed descriptions of the owner’s  life elsewhere helping her husband build churches and congregations to fill them. Yet, according to my mother, in that lone paragraph, she complained about her son, her fears for his welfare, and the town and its influence on him.

Really, my sleepy, rural hometown was once the Wild West? And in a way, it was. In the mid-nineteenth century, it was the end of the railroad going to California. It boasted two hotels for an overnight stay while arrangements were made to travel by stagecoach, and so, the little borough boomed having beaten out another one ten miles south for the honor. The losing town no longer exists.

And so, All Within Time, was written. The book is part history of the castle and the family. It’s part fiction to weave together the loose ends, and it’s part fantasy as the investigation of the castle is done by a twentieth-century career-woman grappling with nineteenth century inconveniences as a mere servant. Last, but not least, it’s part romance.

So I will be posting updates on my publishing  journey. Please check out my website, CandeeKramer.com, for more about me.